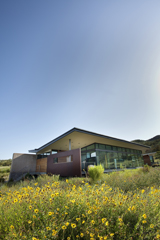 Laguna Coast Wilderness Park is ever-changing. Exposed rock and fossils tell a story of a land covered by water and occupied by sea creatures, a land riddled with faults, a land where magma once oozed from the ground and is now hardened and eroding.

Laguna Coast Wilderness Park also reveals a long human history. Archaeologists have discovered evidence of villages that are thousands of years old. In the last century or two at Laguna Coast, ranchers rounded up their cattle and farmers planted walnut groves.  More recently, the community has worked to save this piece of nature, creating stories that captivate our imaginations and awaken our sense of connection with the land.

You can find Laguna Coast Wilderness Park’s earliest history written in stone. Some park rocks date back to the end of the age of dinosaurs -- 65 million years ago – with clay and sand deposited by streams, swamps, and ponds near the coast. In other park locations, fossil scallops tell of a time 40 million years later, when salt water covered the park and sea creatures thrived here on an ocean shelf.

Millions of years later, but still thousands of years ago, people made their homes in Laguna Coast Wilderness Park. Grinding rocks, cog stones, projectile points, and stone ornaments are examples of artifacts discovered in the area. Radiocarbon research shows that human habitation of Laguna Canyon extended as far back as 2,000 years B.C.

Evidence indicates that the Acjachemen people inhabited the Laguna Canyon area. A village called Tom-ok’ was located in Laguna Canyon. Shortly after the arrival of the Spanish missionaries in the mid- to late-1700s, many local Indians were enslaved and forced to abandon their culture.

Laguna Coast Wilderness Park is located in the San Joaquin Hills, named after the Rancho San Joaquin. This rancho was formed from two large Mexican land grants made to Jose Andres Sepulveda in 1837 and 1842. Sepulveda was known for his hospitality, political involvement and love of fast horses.

When Rancho San Joaquin was granted to Sepulveda, the governor failed to acknowledge that Acjachemen villages already occupied the land. Even to this day, Acjachemen people continue their struggle for formal recognition as a tribe - and to receive compensation for the loss of their land.

The Great Drought of the 1860s decimated the cattle-based economies, and the situation paved the way for the next American landowner, James Irvine. In 1864 and 1866, James Irvine and partners purchased the bulk of what would become the Irvine Ranch for $25K, including Rancho San Joaquin. The family farmed and ranched the land for over a century before the Irvine Company’s current owner, Donald Bren, completed his purchase of the ranch in 1983.

The growth and development of the surrounding area spurred citizens and politicians to preserve some of the last remaining areas of wild Orange County.  Laguna Beach bookstore owner James Dilley returned from a trip to Europe in the 1960s with the idea of creating a greenbelt around his city. The proposed “Laguna Greenbelt” would preserve not only habitat for flora and fauna, but also foster the sense of community that still exists in Laguna Beach and South Laguna.

In 1989, to show their desire to protect the land, artists and other citizens built “The Tell,” a 636-foot wall that followed the ridgelines of what is now the Dilley Preserve. The citizens of Laguna Beach staged an 8,000-person rally to save the canyons. The Irvine Company, appreciating the passion of the community, agreed to sell several parcels and donate others in order to create present-day Laguna Coast Wilderness Park.

Dedicated Laguna Beach citizens created the Laguna Canyon Foundation to help with the preservation project. The citizenry of Laguna Beach voted to tax themselves to create the park – and Laguna Canyon Foundation raised additional funds and partnered with the State of California and the County of Orange to purchase the land. These joint efforts led the County of Orange to form Laguna Coast Wilderness Park which opened on April 10, 1993 and is managed by Orange County Parks.

As a result of the community’s work, tens of thousands of visitors enjoy the park yearly.   They hike, bike, or horseback ride more than 40 miles of trails. During their travels in Laguna Coast Wilderness Park, visitors celebrate the chance to view a mule deer, bobcat, or red-tailed hawk.

The Nix Nature Center, a cooperative effort of OC Parks and the Laguna Canyon Foundation, opened in 2007 and was made possible through a generous donation from Laguna Woods residents James and Rosemary Nix. The Nix Nature Center serves to remind visitors of the park’s special value. The exhibits explore the many meanings of Laguna Coast in the minds and hearts of those who use the park for recreation, artistic inspiration, scientific study, and cultural renewal.

You can become a part of Laguna Coast Wilderness Park history by visiting for a hike - or attending a guided walk - or assisting with stewardship projects. We look forward to sharing this magical place with you!