OC Parks is planning to construct, operate, and maintain the Craig Park Bike Facility, a 9.7-acre mountain bike skills course facility for all ages and abilities. The proposed project is located within Craig Regional Park in the City of Fullerton, California. The project site is on land owned by the U.S. Army Corps of Engineers (USACE) in relation to the operation of the adjacent Fullerton Dam for flood control purposes. In addition, the land is leased from USACE by OC Parks for recreation purposes in association with the operation and maintenance of Craig Regional Park.

The Project’s design-development phase was funded by OC Parks and the International Mountain Bicycling Association (IMBA) Bike Park Initiative Grant. The Bike Park Initiative Grant is an IMBA-led project designed to foster the development of world-class bike park facilities across the country. In early 2014, OC Parks initiated a study with the IMBA Trail Solutions program to determine the feasibility of hosting a bike park facility in Orange County and to explore creating a bike facility within OC Parks. Although several existing County regional park locations were considered, Craig Regional Park was selected as the most feasible due to the site location, size, topography, and proximity to existing amenities.

Two public workshops were held in January and March of 2015 to solicit public feedback on design concepts and proposed bike facility features and move towards finalizing a design-development plan, signage guidelines and project report. Engagement opportunities such as these have demonstrated the general public’s demand, desire and interest for a bike park facility based on public input and participation in this process.

The proposed project includes a variety of trail designs for riders of all ages and at different skill levels – such as pump tracks, dirt jump areas, slope style courses, flow and loop trails – as well as covered picnic tables and rest areas. The project also includes installation of wayfinding signage, an informational kiosk, and storm water bioswale/filtration systems.

U.S. Army Corps of Engineers (USACE) staff is currently reviewing our the project submittal package (federal environmental documentation and preliminary grading plans) and will tentatively provide formal approval winter/spring 2021 so we may advance the project to subsequent final design (PS&E) and construction phases.

U.S. Army Corps of Engineers (USACE) staff is currently reviewing our project submittal package (state environmental documentation and preliminary grading plans) and will tentatively provide formal approval summer of 2020 so we may advance the project to subsequent final design (PS&E) and construction phases.

Since the project requires approval from USACE in the form of a Lease Agreement Consistency Determination or Modification, OC Parks is in the process of obtaining concurrence from the federal agency. The final design phase (preparation of plans, specifications and estimates) is anticipated in fiscal year ’19-20 as the Board of Supervisors adopted the environmental document (CEQA Initial Study/Mitigated Negative Declaration) back on 9/25/18.

The Board of Supervisors on Sept. 25, 2018 adopted the CEQA Initial Study/Mitigated Negative Declaration Report (environmental assessment) and approved the project concept for the Craig Park Bike Facility.

OC Parks is currently in the process of regulatory review by US Army Corps of Engineers. The final design (plans, specs and estimates) phase is anticipated in winter 2018/19 and, subject to available financing, construction is anticipated in 2020. We will update this page as the project progresses. 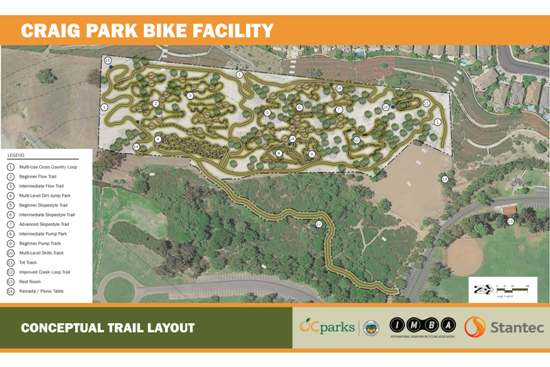 Public comments and inquiries may be made at CraigParkBikeFacility@ocparks.com