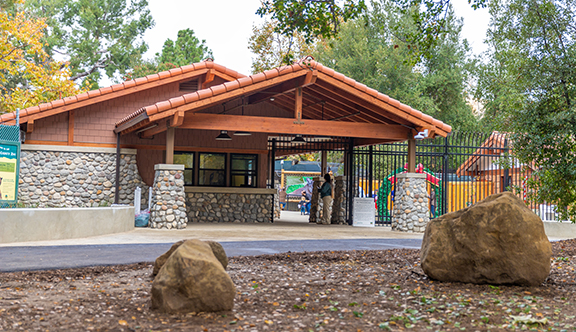 December 2019 -- The first phase of planned improvements at the OC Zoo in Irvine Regional Park opened to the public. This included an interim entry plaza, restroom building, and an emergency power backup system with an innovative Tesla solar battery that will provide emergency power to selected vital areas of the OC Zoo in the event of a prolonged power failure.

October 8, 2019 -- The Orange County Board of Supervisors awarded the design-build contract to Rudolph & Sletten, Inc. and Jeff Katz Architecture, to provide design and construction services for the OC Zoo Large Mammal Habitat Project.

The OC Zoo Large Mammal Habitat Project will be located within approximately two acres of the back area of the zoo as part of a new Oak Woodlands habitat referenced in the General Development Plan. The Project will have two separate areas that can be adjusted to create four separate display spaces, natural-looking rock walls, climbing platforms, a waterfall element and secure fencing to protect the public and minimize injury to the animals in addition to a natural-looking bridge to improve animal viewing by zoo patrons. The new habitat strives to meet industry standards for contemporary zoo exhibits and will provide an exciting attraction and overall guest experience in the Zoo. The immersed landscape not only attempts to recreate the appearance and sense of the animal’s natural environment, but also to place the visitor in a similar context.