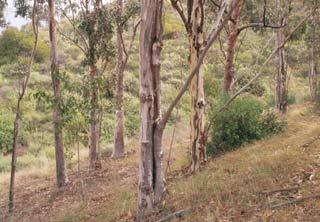 In 1897 the rancho was purchased by James Irvine, who leased out the canyon to several farmers. Beginning in 1891, and continuing after the Irvine purchase, James Peters, for whom the canyon is named, dry-farmed barley and beans in the upper part of the canyon. Peters built his home and planted a eucalyptus grove near Lower Peters Canyon Retarding Basin.

In 1899, a group of sportsmen from Orange and Santa Ana introduced the game of golf into Orange County. Leasing land in Peters Canyon from the Irvine Company, a nine-hole course was laid out by the Santiago Golf Club. Greens were made of oil-soaked sand and fairways of native soil. A red clubhouse was built on the ridge that now extends into Upper Peters Canyon Reservoir. The conspicuous building was seen by those who crossed the canyon between the El Modena Grade and Irvine Regional Park, hence the name "Golf Canyon" came into use.

To supply Irvine Ranch's water needs for its growing agriculture industry, two reservoirs were built. The first, Upper Peters Canyon Reservoir, was completed in 1931. The lower reservoir was constructed in 1940. Both lakes were used to regulate the Irvine Company's draft from Santiago Reservoir, as well as conservation of runoff from Peters Canyon watershed. Today the lower reservoir is dry and serves as a flood control basin.

During World War II, Peters Canyon was used as a training area for the U.S. Army. "Camp Commander," as it was known, was established in eucalyptus groves near Little Peters Lake, or what is known today as Lower Peters Canyon Retarding Basin. Mock battles were staged between Camp Commander and "Camp Rathkey," an Army post two miles away in Irvine Park.

On March 3, 1992, the Irvine Company dedicated 340 acres of Peters Canyon to the County of Orange to be preserved as open space. This land was turned into the beautiful park that exists today.