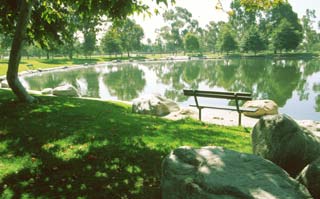 Early in World War II the United States Navy Department purchased a square mile of agricultural land in what is today the City of Fountain Valley. The land was purchased to construct military airfields which were utilized in conjunction with the El Toro Marine Corps Air Station and Santa Ana Marine Corps Air Base Facilities. Three landing fields were constructed in a triangular shape in the center of this area, with each field being approximately 2,200 feet in length. During and long after World War II these fields served as military training fields, and it is possible today to find residents in Orange County who flew Navy Corsairs, propeller driven aircraft in World War II, and used this field as a touchdown training location. After the war years the military use of the fields changed to a helicopter touchdown or practice area as the Santa Ana Marine Corps Air Station emphasis shifted to helicopter use.

As the County of Orange developed its Master Plan of Regional Parks in the 1960's, the Mile Square site was viewed as an ideal location for a regional park in the urbanizing area of Orange County. In March of 1967 the county entered into a long term lease with the Navy Department for the perimeter acreage of the site. That lease allowed the county to develop this acreage for regional park purposes, and until the county could afford to develop all the acreage, the county was permitted to continue the agricultural lease.

The park's Phase IV development commenced in the spring of 1987. Found within this final phase is a 18-hole executive golf course, complete with club house, driving range and banquet facility. Additional acres of park land include picnic facilities, bicycle trails, landscaping and a second park entrance.