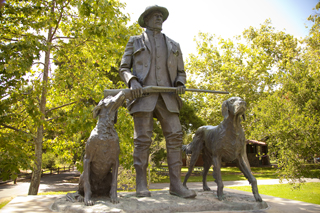 Irvine Park was part of Don Teodosio Yorba's original Mexican grant of Rancho Lomas de Santiago. The first recreational use of the oak grove was by the early German colonists who settled Anaheim in 1857, and the area became known as the "Picnic Grounds".

Sheepmen from Monterey County bought the Lomas for $7,000, the same price paid six years before. The demand for wool was high, and soon flocks populated the park and adjacent plateaus.

As the nearby communities grew, the "Picnic Grounds" became a mecca for valley dwellers, and with organized festivities on May Day and the Fourth of July.

In 1876, the grove and the surrounding rancho became the sole property of James Irvine who had bought out his partners. Seven years after his father's death, James, Jr. decided to give the county its first park.

F. P. Nickey, then president of the Board of Supervisors, accepted what was described as the "Gift Munificent" with the donation of the 160-acre oak grove. Irvine stipulated that the area should always be kept as natural-looking as possible, and that the trees should have the fullest care. One dollar passed from the county treasury to James Irvine on October 5, 1897, and the area was named "Orange County Park".

In 1898, L. D. West was appointed park "custodian" to ward off sheep herders and wood choppers. Early park improvements were limited to a caretaker's house, outdoor stoves, and a couple of "two-holers".

The first major development was an open dance pavilion with a bandstand on one end. The building stood for nearly thirty years, approximately where the refurbished bandstand/stage is now.

Formerly the road ran directly through the park, then through what is now Irvine Lake, past Silverado and into Modjeska Canyon. When W. M. Boring became custodian in 1901, the road was rerouted. Additional changes occurred with the park's more recent expansions.

When A. B. Tiffany took over a custodian in 1907, one of his sidelines was selling soda pop to thirsty visitors. By 1912, the concession business warranted a store. A roofed stand was built just south of the present snack stand.

Until 1917, when it was banned, the favorite tenting spot was "Camptonville", a wooded area adjacent to the park on the left side of the road after it crossed Santiago Creek. In order to get rid of squatters, camping in the park itself had to be prohibited in the late 1930s.

On October 21, 1913, the Board of Supervisors agreed to pay E. G. Stinson $3,160 to excavate a basin for a "boat pond". Working with a pair of mules and a scraper, Stinson scooped out the old marsh and diked up two sides. The lake filled from the springs in its bottom, so much so that a spillway had to be installed for the overflow. When Irvine Dam was built, water no longer ran down Santiago Creek and the park lake had to be artificially filled, but continued to be difficult to drain successfully. The boat house was built in 1914 and the county purchased eight redwood rowboats.

During the custodianship of S. C. King (1916-1919), Orange County Park was the setting of many official gatherings, including dedications and veterans award ceremonies.

In 1919, Jesse B. Irwin became official custodian. F. F. "Fay" Irwin succeeded his father and supervised the park from 1929 to 1960; and his brother, Joe was the park's chief concessionaire. Joe Irwin managed the boathouse and the park's burro rides. After several years, the burros were traded for bicycles, starting with ten in 1932.

The early 1920's saw some park improvements such as wooden picnic tables and restrooms. Commercial electricity was not available till the mid-20's. In the late 20's, a "peewee" golf course was built just outside the old park entrance. Later, the site was leased to Ray Martin and his father who added a miniature railroad with a quarter-mile track. The trains left from the "Irvine Park Depot (Pop. 5 or 6)".

A popular movie setting, some scenes filmed in the park are in the "Goose Girl," "Picadilly Jim", "A Yank at Eaton", "Lassie Come Home," "Topper", "Black Mail", "Summer Holiday", and "Thanks a Million."

At first all park maintenance was done by the Irwins and several hired hands. In 1924, the Board of Supervisors recognized the untapped labor of jail crews. Robert C. Northcross supervised some of the park's early jail crews, and enlisting his prisoners, highjacked the Indian bedrock mortar which is still on display in the park. This mortar was from nearby Black Star Canyon, but the oak grove was no doubt an important acorn harvesting grounds for local Indian groups.

The cannon once stood on the Santa Ana Courthouse lawn. Cast in 1853 by the Ames Co. Foundry of Chicopee, Mass., this howitzer was brought to California during the Civil War and assigned to the garrison of California Volunteers at Drum Barracks, Wilmington. Secured from the State Armory in Los Angeles, it was installed at the courthouse on June 20, 1908. Replaced in 1925 by a captured World War I field cannon, the Civil War cannon was then brought to Irvine Park.

The Spanish American War Memorial was also dedicated on November 5, 1926. On one side, the monument has a tablet cast in metal recovered from the U.S.S. Maine, which was sunk in Havana Harbor in 1898. On the opposite side of the monument is a bronze plaque with the Muster Roll of Company L, 7th California Volunteer Infantry, a Santa Ana unit that served during the War. The U.S.S. Maine tablet lists the four members of Company L who died during their service with the Company in California and the Philippines.

In the summer of 1928, the Board of Supervisors changed the park's name to "Irvine". A building program followed with a new pavilion, an exhibition hall, and a new store designed by Frederick H. Eley.

The "Exhibit Building" was intended as a museum to house relics of Orange County's past, but became a local "Parade of Products", representing agriculture and manufacturing products.

During World War II, Irvine Park was closed to the public and opened as an army post called "Camp Rathkey". Another army unit was set up in nearby Peters Canyon, and sham battles were waged between the two posts. On October 16, 1943, during army occupation, a fire damaged the pavilion. After the war, the outside stage was rebuilt, but not the ballroom.

Throughout its history, Irvine Park has housed a wide range of animals. William A. Kinsley succeeded Fay Irwin as superintendent in 1960. He built up a compound of birds and animals which became known as the park's zoo.

The park underwent a major renovation and redevelopment in 1982- 83. This included restoring the old buildings; redevelopment of the three group picnic areas; addition of three playgrounds and horseshoe pits; new turf and landscape; and relocating the roadways. A new zoo facility was also constructed which includes a children's barnyard area and native animal exhibits. The year 1983 also brought the listing of the park on the National Registry of Historic Places.

An Interpretive Center has been constructed in the historic exhibit hall. It has displays featuring the park areas natural, cultural, historical and recreational resources, and includes an audio/visual theater for interpretive presentations.

Irvine Park has a rich history, and contains some of the oldest Coast Live Oaks in Orange County. Concern for the preservation of the park's specimen oak trees necessitated much of the redevelopment and redesign of the park's facilities.