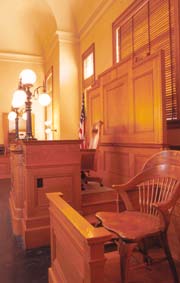 In 1893 the newly created County of Orange purchased the land where the Old Courthouse sits from William Spurgeon, the founder of Santa Ana, for the express purpose of building a permanent courthouse. But the first building constructed on that parcel was not a courthouse but the county jail, which opened in 1897. Not until 1900 did the County Board of Supervisors commission the design of a courthouse by Los Angeles architect Charles Strange. His design was remarkably similar to that of a county courthouse in Iowa, a point not lost on the early residents of Orange County, many of whom had immigrated from the Midwest. The new courthouse was to be the most impressive building in early twentieth century Orange County.

After seventeen months of construction, the building was formally dedicated in November of 1901. It housed most of the functions of County government. Superior court required just one courtroom, but by 1914 the addition of a second courtroom was required. As the populations of Orange County and the rest of Southern California grew, the Old Courthouse was inadequate for all of the needs of local government. Additional buildings were constructed, and nearby hotels and churches were rented for offices and courtrooms. Despite several proposals to remodel and expand the old Courthouse, the building remained essentially unchanged.

The Old Courthouse was the scene of several important and far reaching court cases. In People vs. Termo Corporation (1933) , the bench ruled that the State of California was entitled to royalties for easements for off-shore oil drilling. In 1941, the court found for the plaintiff in Irvine Co. vs. California Employment Commission, holding that all employees of a large farm enterprise were still considered agricultural labor and thus exempt from the Unemployment Insurance Act. During one of the most celebrated trials of its era, People of California v. Gollum and Overell (1947), hundreds of people flocked to the Old Courthouse for a glimpse of one of the defendants. Though the trial resulted in an acquittal of the defendants, new regulations for the sale and purchase of explosives were enacted. Chimel v. California (1965), which eventually was heard by the United States Supreme Court, set new rules pertaining to search and arrest.

The courts left the Old Courthouse in 1969 for a new and larger facility on Civic Center Drive in Santa Ana. Soon, the Old Courthouse was recognized for its historical significance, and was designated a California State Historic Landmark and placed on the National Register of Historic Places. In 1983, restoration construction began on the Old Courthouse, a project which was completed in 1992.