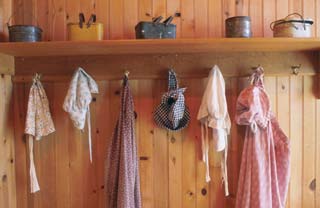 Heritage Hill Historical Park had its origins in the building of the Serrano Adobe in 1863 by Don Jose Serrano's family as the original land grantees of the Rancho Canada de los Alisos, granted to Don Jose by the Mexican government by grants in 1841 and 1846. The Serrano Adobe passed through various hands, was first restored by George and Dwight Whiting Jr. in 1932. It was made a state historical landmark No. 199 and was last owned privately by Mr. and Mrs. V.P. Baker from 1958 to 1969. The Bakers were quite fond of the old house and spent considerable time and money restoring and re-furnishing the house for use as a vacation home and meeting place for the Aliso Water Company.

When the Bakers sold the 5,000 acre Baker Ranch to Occidental Petroleum in 1969 for $11 million dollars, they stipulated in the sale that the Serrano Adobe be donated to a public agency for preservation. While developing the Lake Forest subdivision, the Serrano Adobe and other land along Serrano Creek totaling 55.9 acres was donated to the County of Orange in 1974. The County then set aside 4.1 acres surrounding the Serrano Adobe for the development of an historical park. The Saddleback Area Historical Society was formed in 1973 and became involved in efforts to save other historic structures from destruction as the old town of El Toro rapidly disappeared with the subdivision of the area. Negotiations for acquisition of El Toro's first church, St. George's Episcopal Mission (1891), and the first schoolhouse, the El Toro Grammar School (1890), resulted in successful fund-raising in the community to finance moving these buildings to the Serrano Adobe site in 1976.

The County continued developing plans for an historical park at the Serrano Adobe site based on the historic village concept. In 1978 another venerable El Toro landmark, the Harvey Bennett Ranch House (1908) became available. Cooperation between the County, William Lyon Company (developers of the Bennett Ranch subdivision) and the Historical Society resulted in the donation and move of the Bennett House to the Serrano Adobe site that same year.

Further development and restoration of the historic structures permitted the opening of the Serrano Adobe site as Orange County's first historical park under the name Heritage Hill Historical Park in May, 1981. The Bennett House restoration and other park improvements were completed and the park was rededicated in September, 1985.