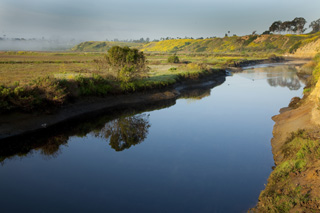 The white cliffs of Upper Newport Bay are composed primarily of microscopic diatoms representing the Monterey Formation and were formed 15 million years ago. Further north, past Big Canyon is the "newer", brown Capistrano formation. The Bay has been sculpted by the Santa Ana River and carved during the glacial period of the Pleistocene Epoch. Fossils from mammoths, bison and giant sloths have been discovered in the sedimentary deposits on top of an older marine terrace. Until 1862, the Upper Bay flowed directly into the Pacific Ocean.

The earliest human inhabitants of the Bay lands lived here nearly 9,000 years ago. Indians known as Gabrielino dwelled here over 2,000 years ago and subsisted on the fish and plants of the Bay. Within 50 years of the advent of the mission period, they had all but disappeared.

Since that time, cattle and sheep have grazed the hills above the bay, called Bolsa de Gengara (bay with high banks) by the Spanish, and then Bolsa de San Joaquin by the Mexicans. The steamwheel steamer "Vaquero" helped generate the current name...in 1870 it carried a load of lumber into the Bay, hence the designation, "New port."

James Irvine and partners acquired the Bay in 1864, for 37 cents an acre. These holdings supported a salt works from the 1930s until 1969 when it was destroyed by floods. Shellmaker Island was home to several companies until the late 1980s. Shell material was dredged and sold as a chicken feed supplement, and dredging spoils were deposited by the Arches, on Shellmaker Island and at Big Canyon, among other locations.

Preservation of Upper Newport Bay began with a fight for survival in the 1960s when the area was designated from development to provide a water-skiing area. Approximately ten years of lawsuits ensued by environmentally concerned citizens, and ended in 1975 with the undeveloped portions of the Upper Newport Bay becoming a 752 acre ecological reserve under the jurisdiction of the State of California Department of Fish and Game. In the mid 1980's the County initiated negotiations to obtain title to bluffs surrounding the reserve. In 1989, the county accepted the 135-acre Upper Newport Bay Nature Preserve.