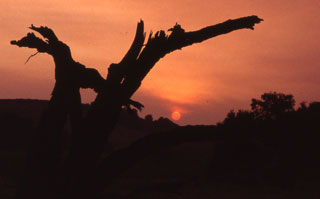 Riley Wilderness Park is as rich in local history as it is in native wildlife. The first Spanish presence occurred in 1769 when Captain Gaspar de Portola and his entourage of 63 soldiers and 2 priests made their way into the area in search of suitable mission sites along the California coast. Wagon Wheel Canyon, where the park now sits, was once part of the original 47,432 acres of land granted in 1845 by Governor Pio Pico to his brother-in-law, John Forster. Forster was a prominent English trader. When Forster's heirs were faced with financial difficulties they were forced to sell the land to James C. Flood and the Irish cattleman, Richard O'Neill, Sr. The land was used to graze cattle and establish one of the largest ranchos of that period. The park officially opened in 1994 as General Thomas F. Riley Wilderness Park, in honor of the former Fifth District Orange County Supervisor. General Riley's dedicated efforts secured this park and several thousand acres of preserved and open space land in south Orange County.