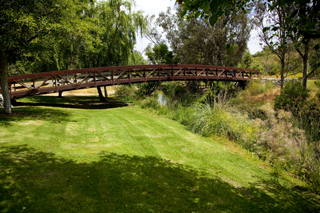 Laguna Niguel Regional Park was originally a part of the Mexican grant Rancho Niguel. This rancho was granted to Juan Avila in 1842 by Governor Alvarado. The ranch was named for a local Indian Village called "Niguil." Juan Avila, referred to as El Rico (The Rich), was considered one of California's finest rancheros because of his conservative way of life. In 1878, the rancho was rented from C. B. Rawson by L. F. Moulton. In 1881 Moulton bought out Rawson. Additional property was acquired and eventually the ranch consisted of 21,000 acres. One third of the ranch was later acquired by a man named Daguerre. In 1960 the Laguna Niguel Corporation purchased portions of the ranch. The Moulton family still retains 9,000 acres of the original ranch property.

In 1970, the Laguna Niguel Corporation donated 109 acres for county park use. An additional forty-five acres, including the lake and dam area, was purchased by the County and Flood Control District.

The park was developed and opened to public use in 1973. A bicycle trail which runs adjacent to Moulton Water Treatment Plant connects this facility to the nearby Crown Valley Community Park.

In 1976, a lake concession building and boat dock were constructed by the county on a 10-year concession lease.

In 1981, S & S Construction Company donated an additional 20 acres for county use. This extension of Laguna Niguel Regional Park known as Kite Hill was developed into a model glider area which includes a restroom, picnic area parking and paved access off of Aliso Drive free of charge to the public.

In June of 1983, a Gazebo was constructed on the crest of the scenic turnaround over looking the lake at Area Five. This particular addition has generated a greater interest in reservations for wedding ceremonies performed within our facility.