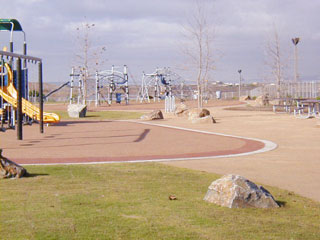 The idea for Harriett M. Wieder Regional Park (named after Harriett M. Wieder, the first female elected in 1978 to the Orange County Board of Supervisors, who served until 1995) was conceived in the mid 1970s, with the initial plan for park development completed in 1992.

In 2001 conceptual design of the first phase of development began as a result of collaborative efforts by Supervisor James Silva, District II, and Huntington Beach City officials to obtain city and regulatory agency permits. And with much anticipation by area residents, the project commenced with a groundbreaking event for Phase 1A on Sept. 20, 2002. With support and funding by Second District Urban Parks and Proposition 12 funds, Wieder Park officially opened to the public April 6, 2004.

The County currently owns about 33 acres for park land and expects one day to gain access to the entire 106-acre site that is partially tied up in private development deals and long-term oil leases.