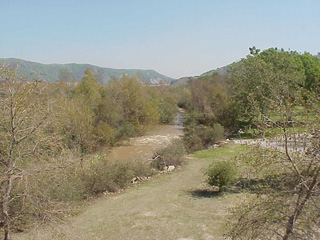 The land on which Featherly Regional Park was built was originally granted to Jose Antonio Yorba by the King of Spain. Jose's son, Don Bernardo, expanded the Rancho and it became the greatest ranchero of early California. He was known throughout the state for his wealth and hospitality.

Years later a portion of the rancho was purchased by the Irvine family. The Irvine Company used this area for cattle ranching but as the population increased, the area was closed for the protection of the herd.

This area along the Santa Ana river banks was a favorite picnic spot and swimming hole for local residents. County Supervisor Cye Featherly opened talks with the Irvine Company in regards to obtaining land for a public park in Santa Ana Canyon.

In the late 60's a master plan of Regional Parks was developed to meet the growing recreational needs within the County. Federal and State funds were acquired for construction. Featherly Regional Park opened in 1970 as the third county park in Orange County.

The park provided both picnic and camping facilities until the late 1970's. Featherly Regional Park was converted to camping only following the opening of Yorba Regional Park just five miles to the west (which is a picnic only, day use facility).